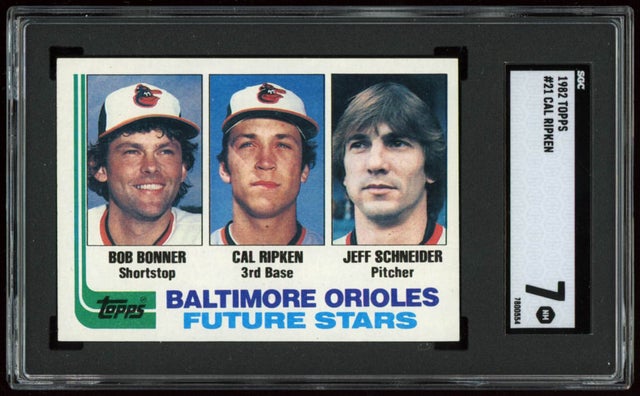 Card has been graded (SGC) 7. Please see scans for details regarding the condition of the card. (Baltimore Orioles)

Cal Ripken Jr., nicknamed "The Iron Man", played 21 seasons for the Baltimore Orioles. One of his position's most offensively productive players, Ripken compiled 3,184 hits, 431 home runs, and 1,695 runs batted in during his career, and he won two Gold Glove Awards for his defense. He was a 19-time All-Star and was twice named AL Most Valuable Player. Ripken is best known for holding the record for consecutive games played, 2,632, surpassing Lou Gehrig's streak of 2,130 that had stood for 56 years and that many deemed unbreakable. In 2007, he was elected into the National Baseball Hall of Fame in his first year of eligibility, and currently has the fourth highest voting percentage of all time (98.53%).